Tower fans are considered one of the most effective types of fans, mainly due to their unique design: Thanks to their vertical blades, they can move air more efficiently than other fans, which generally move air horizontally.

Even within the tower fan range, there are dozens of models, sizings and configurations. The brand is modern and embraces some filtration and technology features that other ranges of fans simply don’t.

For people who need something which is free standing but isn’t too intrusive or bulky, and doesn’t take a huge amount of space in the home, the range can be very useful. Tower fans often have multiple oscillators which can give a bit of a boost of power, so they’re good for hot homes, too.

Ask yourself what you need from your fan before you buy. Will a desk fan really have enough power? A tower fan isn’t always the cheapest but they can provide a cooler environment and might be quieter than other options, too.

Though it isn’t a top priority for fans, the Bowin tower fan range is also good for people who care about the looks of the items they’re putting in their home! They look quite stylish and compact.

Naturally, the features of each tower fan in their range all have their own selling points. All have multiple speeds.

Many of the tower fans feature an Ionizer. This is built-in to the product and isn’t something that requires maintenance. It creates negative ions (this is a good thing) and then releases them in an effort to make the air feel fresher. It lowers levels of air pollution and makes it feel like you’re sitting outdoors.

For more details on what an Ionizer is, and the benefits it can have for a room, this handy guide can walk you through it.

Remote controls are also a feature among the tower fans in this range.

Bowin remotes are great, as they have a very simple interface. They also work at up to a 15 feet range, which is plenty of space for most of us. You might think a remote is overkill, but if you’re lying comfortably in bed and start to feel overly hot, being able to switch on the fan without having to get up is a blessing.

Other technology features which can be really useful include the timer. You can set your alarm to come on or turn off at a time which is suitable. For instance, have the fan turn on 30 minutes before you get home for a cool room waiting for you after work. Alternatively, if you know that you won’t need the fan on all night, you can set it to turn off after a while once the temperature has dropped and you are fast asleep.

Something that many Bowin fans offer is a curved design across the multiple blades of a fan. This means that the cool air disperses better around the room, and is preferred by people who are covering a larger space with their tower fan.

The noise produced by these fans varies from model to model within the range.

Though there are quieter models on the market than some Bowin products, they are certainly not excessively loud.

One thing that is only offered within the Bowin range is their patented safety plug.

This is on both their fans and their humidifiers. The device shuts off any electric current if there is a fault detected within the motor or the power supply. This can help to avoid potentially hazardous issues some fans (or power supplies) can develop over time. 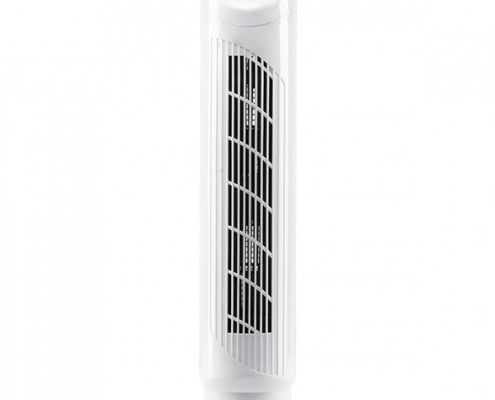